What is a thermowell?

Thermowells are categorized by their connection to a process, the most common types are:

Threaded thermowells are usually screwed into a pipe in which to measure the temperature of a liquid within the pipe. This is the most common type of thermowell, and they have the lowest pressure rating, often they cannot be used above 70 bar however, they are prone to leaking. Tread tape should be used to act as a seal as this reduces the chance of leaking.

Socket weld thermowells are welded permanently into place. They are used with weldolets. Weldolets are used to create branch fittings within a pipe system. From the main pipe, a branch pipe has a weldolet inserted into it which allows a dial thermometer to be fitted using a socket weld thermowell and then welded into place. Dial thermometers with socket weld fittings can then be placed inside and be used for temperature readings.

A flanged thermowell has a collar attached around the opening which is above the shank that has been inserted into a pipe. This is then screwed together to the mating flange on the pipe nozzle to secure it.

Thermowell shanks can be of different sizes and lengths and the user will have to determine the best option when choosing a thermowell to best fit their operating system. Most common shank types are straight, tapered and stepped. Straight shanks are considered the original design for thermowells and should be considered for low velocity and low-pressure applications. A tapered shank is used for its superior strength as it is often the best option for heavy duty applications and resistance to vibrations in high velocity systems. A stepped shank is more responsive to changes in temperature due to its significantly reduced tip diameter. 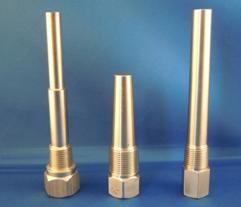